Magnus Holmander and Irina Serotyuk met when they both did their master studies at the Royal College of Music in Stockholm. The lack of original music for clarinet and accordion challenged Magnus and Irina to come up with their own and very personal repertoire. In 2017, the clarinet and accordion duo was awarded first prize in one of Sweden’s biggest chamber music competitions “Ung&Lovande”. Today the duo is frequently touring and giving concerts all over Sweden and their program includes everything from impressionism to modern art music with elements of jazz, Slavic folk music and klezmer. 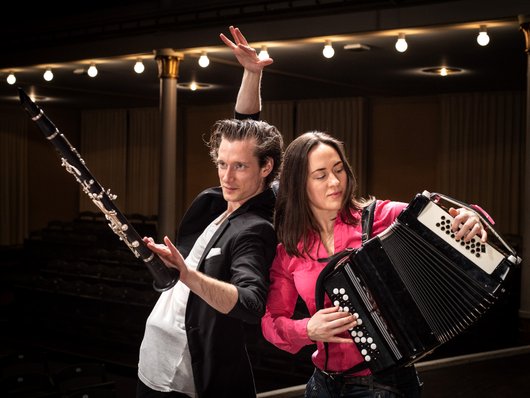 With her technical brilliance and aspiration to challenge stereotypical norms, Ukrainian accordionist Irina Serotyuk has recently established herself as a prominent figure within the Swedish accordion tradition. In 2018 Irina was the first accordionist to ever reach the final in Sweden’s most influential classical music competition – Solistpriset. She was also the first Ukrainan to ever win one of the most prestigious accordion competitions: “Internationaler Akkordeonwettbewerb Klingenthal” – not only once, but twice, both in 1999 and in 2005.

After her studies in Odessa and Warszawa she continued studying at the Royal Academy of Music in Stockholm. Today she has established herself as a sought-after musician with Sweden as her base.

Magnus Holmander –the musician who can levitate a note stand and make a clarinet vanish!

Through his unique combining of music and magic, Magnus has succeeded in creating his own sphere in the world of classical music, and has collaborated with contemporary composers such as Rolf Martinsson, Anders Hillborg, Klara Stirner, Benjamin Staern and Jacob Mühlrad.

In 2019 he was selected as ECHO Rising Star 2019-2020, and in the same year he was listed as one of the 20 most influential musicians in Sweden by the Swedish music magazine Opus. Magnus received his bachelor and master diplomas from The Royal Academy of Music in Stockholm and studied under Hermann Stefánsson and Emil Jonason.